You’ll find pockets of Fairweathers around the UK – and of course overseas as well. My own branch goes back to St Cyrus, Kincardineshire with links to places like Alyth, Brechin, Forfar, Rescobie, Kirriemuir, Dundee, etc. It’s from here that many Fairweathers set out for the New World. There are clearly two or more branches of the family with one strongly based in Dundee and I’ve yet to establish family tree links, although DNA links exist. There was an Alexander Fairwedder in the Angus area in 1626 but a link has yet to be established. My great-grandmother was a Falconer from Glenbervie and through her, I share a distant grandmother with Robert Burns, Scotland’s National Bard. 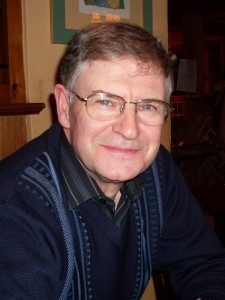 I’m Iain Fairweather and I’ve been building on the work started by my father and uncle in tracing our family roots. Our own family mythology always pointed to the Fairweather’s having a Viking connection. Is there any truth in that? The origins of the name have long been a puzzle and the explanation offered by Burke’s Peerage and dare I say, Ancestry.com,  don’t seem  credible – Fairweather, “one who had a jovial or sunny disposition”. Is there a better, more satisfactory explanation? I’ve added the results of my own research and you can judge if there could be any truth in what I’ve discovered.  There is also a Facebook page – /FairweatherForum.

My own family history might mirror the story of who the Fairweathers were, and how they may have got their name. My father was a farmer and at one point he had a small flock of sheep. My uncle was a banker, but as a hobby, he gathered sheep’s wool, spun it and knitted jumpers. My life’s experience may mirror a real-life explanation for our origins as my own family tree reveals that many of the Fairweather’s were farmers and weavers.

As you look into history, you’ll find that there are no family crests – other than the fanciful creations of those who perpetuate the myth of a people with a “sunny disposition”, where a smiling sun graphic beams out from a graphic crest that, in my opinion, is a complete fiction. Fairweather motto’s are equally fanciful as the Fairweather’s were never part of a clan-type grouping. Despite being in Scotland, probably as long as some of the “Scottish” clans, the Fairweather’s do not belong to a clan and there is no Fairweather tartan. Wherever they came from, they seem to have lived quietly alongside other communities “under the radar” and may have come to Britain along with other groups from various parts of Europe, crossing perhaps from Scandinavia to Scotland and from central Europe into Southern and Eastern England.

So join me on my journey as we try to unravel the mysterious origins of the Fairweather’s, their journeys and their life stories. And just so that everyone is clear, I am no authority. I have simply made some interesting discoveries as I have sought to uncover who we are and where we came from. My particular interest is in those found mainly in the Counties of Angus and Kincardineshire during the 17th and 18th centuries, right up to the present day. This is a work in progress and new material will be added over time. So please bear with me – and I hope it helps you understand more about your own family history.

For your interest, the photos above are as follows: on the right is Robert Fairweather, born 1793, began work as a draper in Alyth and became a farmer in Rescobie, Angus. He is my great, great grandfather.

On the left is Louisa Fyfe Fairweather, his grand-daughter, my great aunt.

In the centre is one I’d love to meet, were it possible to go back in time, for, apart from looking a most distinguished lady, she produced a wonderful needlework sampler as an 8-year-old girl in 1868, which I now have in my possession. She is not a Fairweather as it happens, but a Falconer and my great grandmother. She married a Ronaldson and along with the Fyfes and Stobies these families form the core of our Fairweather family tree.