There are early references to Fairweather’s in the Testaments (Wills) of Rescobie people from the Register of Testaments of the Commissariot of St Andrews, 1549-1823.

John Phairwedder held a land in Perth in the reign of James II (Scon, p. 188), and Christofer Farewethir was serjeant of Linlithgow in 1472 (Sc. Ant., XVII, p. 117). The surname is of considerable antiquity in the Menmuir district. Valter Farwedder, presbyter of Dunkeld, whose name appears in 1547—63 is probably the first of the name in the locality. There were Fairweathers in Blairno in Navar in the early seventeenth century (Jervise, II, p. 340). Walter Fairwedder witnessed a precept of sasine of the lands of Fyndowry in 1558 (REB., II, 280), and Agnes Fairwodder was heir of Robert Fairwodder, merchant burgess of Dundee in 1609 (Inquis., 419). Thomas Fairweather is recorded in Dundee in 1583, and eighteen more of the name appear in the Commissariot Record of Brechin between 1576 and 1800. Thomas Fairwoder was burgess of Dundee in 1634 (Retours, Forfar, 224), and the Devil rebaptized the witch Catherine Skair in Brechin by the name of Isoble Farewedder. Janet Fairweather is recorded in the parish of Olrik in 1664 (Caithness), and John Fairweather of Turriff was killed in the first Great War (Turriff). Fairvedder 1609, Fainvadder 1537, Fairwoother 1649, Farveddar 1607. Fairwaddire, Fairweddor, Farewadder, Farweddar.

If there is a link to John Fairweather (1772) from any of the above, I have yet to find it. A James Fairweather had a son baptised Alexander, 26th Oct 1744. A few Fairweather’s had sons by the name of John and it’s possible that Alexander was John’s father. Unfortunately mother’s names were not recorded. More research required.

John FAIRWEATHER was born in 1772. He married Janet Soutar on February 12, 1792, in Alyth, Perthshire. The Soutar’s were a monied family. He had five children by the time he was 28. He was a weaver in Brae of Reid Lakie and produced sail cloth for the clippers sailing out of Dundee and he acted as a link with ships chandlers in that town. Later he became a merchant in Alyth. Janet’s father was Robert Soutar – a tenant of Bardmonie. He died on 14th May 1826, at the age of 56. He also had a son called Robert Soutar. He left bequests for his grandchildren named below. 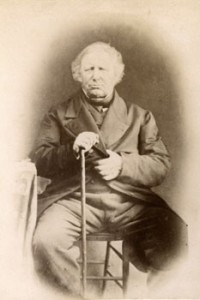 Robert FAIRWEATHER was born on April 1, 1793, at Brae of Reid Lakie, Perthshire. He married Margaret MILLAR and they had four children together between 1826 and 1832. He was a draper in Alyth. His wife Margaret Millar (1797-1839) was the daughter of John Millar (1762-1843) and Anne Lawson of Wester Tullifergus, west of Alyth. A man of energy and vision. As draper he saw the importance of cloth from India which women were anxious to have and he took it out to the surrounding farms and villages investing his profits in property which he sold to buy his farm. He farmed at Craigend of Careston (286 acres) near Brechin which he farmed at the time of the 1851 census. He was known in the family as ‘Auld Craigend’. By 1871 (aged 78) he was living with his son Peter (Patrick) at Baggerton, Rescobie. He died on October 14, 1875 at Carsebank in the parish of Rescobie, Angus and was buried in Alyth church yard, having lived a long life of 82 years.

David FAIRWEATHER was born in 1796. 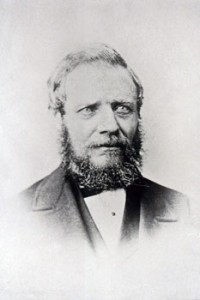 John Fairweather – born May 9,1826 at Alyth, Angus. He was a farmer at Chapelfield, St Cyrus. He married Elizabeth Brown Fyfe on November 5, 1848 of East Mathers Farm, St Cyrus. The farm had to be given up in 1863. John wanted to emigrate to Natal as many others in the area had done. The government was offering 160 acres for each child. But his father-in-law would not hear of it and John moved to Glasgow and became a mercantile clerk in the wool trade. He was in demand as a fiddler at weddings. His son John spoke of him as being very fond of children. They had 12 children in 24 years. He died on July 7, 1885, in Scotia St, Glasgow, at the age of 59 and was buried in Sighthill Cemetery, Glasgow.

James FAIRWEATHER was born on March 27, 1828, in Alyth, Angus, his father, Robert, was 34 and his mother, Margaret, was 31. He married Margaret SCOTT on February 21, 1855. James was a commission agent and could be described as quite a high-flyer in business. But he had to juggle credit notes worth millions and ended up being charged with forgery – and was sentenced to 8 years penal servitude. A sad story but his full story reveals a man of fortitude who embraced his circumstances. He wrote a book anonymously and gave a detailed account of his experience. He died in July 1876 in Stepney, London, at the age of 48. (See dedicated page)

Peter (Patrick) FAIRWEATHER was born on September 6, 1830, in Alyth, Angus, his father, Robert, was 37 and his mother, Margaret, was 33. He married Katherine DAKERS on March 10, 1851, in Brechin, Angus. Katherine was working on Peter’s father’s farm prior to 1851. In 1861 he farmed at Baldoukie, Angus. In 1871 they were farming at Baggarton, Rescobie, Angus and Robert , his father, was living with them. He was a farmer of 690 Acres of which 650 Arable, employing 16 Male Labourers, 16 Women and 42 Boys. They had 11 children in 18 years. In 1881 he was a general merchant living with Katherine at 10 Coltbridge Ter, St George, Edinburgh with family Kate Fairweather 24; Elizabeth Mary Fairweather 23; Charlsina H Fairweather 16; Aggie C J Fairweather 15; Daniel E Fairweather 11. They emigrated to the USA, initially to Euclid, Polk County, Minnesota, where Peter became known as Patrick. They later moved to Alameda, California, where he died on November 20, 1914 having lived a long life of 84 years.

Elizabeth Ronaldson FAIRWEATHER (Liza) was born on October 11, 1849, in St Cyrus, Kincardineshire, her father, John, was 23 and her mother, Elizabeth, was 21. She married John REDPATH on August 17, 1875. She was a teacher by profession. Emigrated to New Zealand. She died on August 18, 1936 and is buried in Aramoho cemetery, Wanganui. Her descendants are Hicks, Couch, Gilligan, Hodge, Martin in New Zealand.

Margaret Ann FAIRWEATHER (Aunt Maggie) was born on October 4, 1851, in St Cyrus, Kincardineshire, her father, John, was 25 and her mother, Elizabeth, was 23. She was a teacher and remained unmarried. She died on April 28, 1921, in Stepps, Lanarkshire, at the age of 69.

Helen Fyfe FAIRWEATHER was born on May 12, 1855, in St Cyrus, Kincardineshire. She married James Sword FLEMING on October 21, 1879. They had nine children in 17 years but of her large family only two had children. Two of their sons, James and William were both killed in action in WW1. Her daughter Elsie married John Cook and had one child, Robert Leslie Cook. She died on December 8, 1938, in Edinburgh, Midlothian, at the age of 85.

Robert Fyfe FAIRWEATHER was born on February 7, 1857, in St Cyrus, Kincardineshire. Sailed from Glasgow on the Roxburghshire to Brisbane, Queensland. Arrived in Brisbane on the 30th June 1876 – aged 19. He died on 25th May 1888 in Queensland at the age of 31, seemingly from heart and liver disease according to a solictor’s letter sent to his mother.

Catherine Fyfe FAIRWEATHER was born on January 20, 1860, in St Cyrus, Kincardineshire. She married Alpin McIntosh Chisholm from Inverness-shire on August 3, 1886, in Glasgow, Lanarkshire. They lived for a time in Oban where several of their 7 children were born. Their daughter Elizabeth Brown Fyfe Chisholm was the only member of family to have children marrying Robert Hamilton. Their son Douglas lived in Forres (1986) and died in Scone, Perthshire 2003. Douglas regularly visited my parents.  Alpin and Catherine had seven children in 13 years. She died on July 5, 1943, in Glasgow, Lanarkshire, at the age of 83

Williamina Fyfe FAIRWEATHER was born on November 29, 1861, in St Cyrus, Kincardineshire. Married Patrick Maitland McHardy, no children. She died on December 12, 1931, in Dalkeith, Midlothian, at the age of 70.

Louisa Fyfe FAIRWEATHER was born on August 8, 1863, in Laurencekirk, Kincardineshire. Teacher by profession, unmarried. Known in the family as Lucy she was a primary teacher and never married. She once had a proposal from a man who said “I’ll give up the drink if you marry me.” She replied, “Give up the drink and I’ll consider it”. She never did marry and died on January 15, 1942, at the age of 78, only a couple of days after her dear brother John. 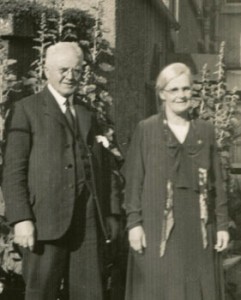 John FAIRWEATHER was born on February 5, 1867 at 11 Franklin Terrace, Glasgow parish of Anderston ( also called 289 Dumbarton Road). Married 1906 in Forest Hill, London to Evelyn Ronaldson. Architect by profession FRIBA, FRIAS, well known and highly respected in his profession. He had a high scholastic achievement and held a teachers certificate. My father says he was a caring and compassionate father. Died 13th January 1942 in Stepps as a result of being knocked down in Cumbernauld Road during a wartime black-out. He was buried in the family plot at Bedlay Cemetery, Moodiesburn. (See detailed page for more information)

Alfred William Fairweather was born on September 14, 1873. He died as a child on February 21, 1875. Two girls were born that year, Ann and Harriet but did not survive.

Children of John Fairweather and Evelyn Ronaldson
William John FAIRWEATHER was born on April 28, 1907, in Stepps, Lanarkshire. He married Margaret Bishop TAYLOR on July 6, 1941. They had two children during their marriage. He worked initially with his father as an architect, served in India during the war and later as an architect with the University of Glasgow. He died on March 12, 1981, in Alloway, Ayrshire, at the age of 73

Ronald Falconer FAIRWEATHER was born on May 13, 1912, in Stepps, Lanarkshire. He married Angilina Duncan PHILIP. He worked as an insurance broker with Stenhouse. He died on March 31, 2000, in Aberdeenshire, at the age of 87.

Gordon Fyfe FAIRWEATHER was born on December 8, 1915. He married Winifred Robinson WHITE on February 23, 1948, in Cumbernauld. They had five children in 12 years. After training in a bank he followed a career in farming. Having to give up the farm after 20 years he worked as a book keeper and later in the records office at the Glasgow Royal Infirmary. He died on the 26th March 2016, a few months after his 100th birthday.