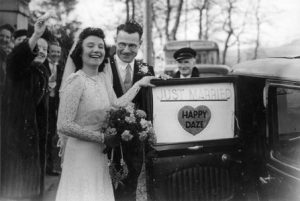 This is her family.

At the time Peter married in 1876 he was working as a ploughman at Glenhove Farm, neighbouring farm to Tannoch where grand daughter Winnie lived for 20 years from 1948, unaware of the connection.

In 1881 he was a farm servant living at Burnhouse Cottage, Dunipace.

In 1901 Peter and Lizzie lived at 42 Forest Place, Cumbernauld and was working as a Kiln Fireman at the Fireclay Works.

John Maxwell was a boarder at Forest Place. He was born 1878 in Glasgow to Irish parents, Henry Maxwell and Maria Rooney. He later married Mary Scott and had two children – Elizabeth and Georgina (Lizbeth and Ina). He later became a Railway Level Crossing Gatekeeper. The nearest level crossing was at Lenziemill. John died in Norwood 15th Sept. 1946.

As a young lad of 10/11 I had a friend whose Dad ( Mr Lee) also worked there as a crossing gatekeeper. I recall that on some Saturdays we helped operate the signals then open and close the crossing gates – under close supervision of course.

Thomas White (Whyte) (b. 1880-1950) and was a boarder at Forest Place and worked as a railway signalman. Tom was the son of John White and Agnes Jardine and was born at Smyllum Junction, Biggar where his father was a railway porter. He married Jessie Scott (b. 1883-1924) and they had four children – Betty, Jessie, Nessie, Winnie (born 8th Sept 1924). 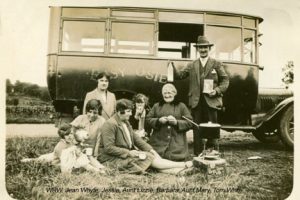 By 1911, Tom was a grocer and living with Jessie at Masonic Place, at least until she died on Nov 13th 1924. He later married Agnes Stewart (Nel) and then lived at Millview. By the 1930s he was a hirer of motor vehicles and ran a Ford Model “T” bus called “Easy Osie”. From old family photos there were often outings to visit other family in Lanark and Wigtown.